Eyal Yanilov was born in 1959. He is a graduate of the School for Trainers and Instructors at the Wingate Institute for Sport and Physical Education and holds a degree in electrical engineering. He is the only person who holds both the highest level granted by Krav Maga founder Imi Lichtenfeld, Expert level 8/Master Level 3, and the Founder’s Diploma of Excellence. Active in this field since 1974, he is now its most senior instructor.

Eyal is best known for developing modern Krav Maga as we know it today, working closely with Imi in systematizing the techniques and principles behind the comprehensive self-defense system. He is also notable for being the first to bring Krav Maga training out of Israel and into the world, training ordinary civilians, military and police units, executive protection personnel, and other security-oriented groups. Eyal is also co-author of Krav Maga: How to Defend Yourself Against Armed Assault, written with Imi.

Eyal served as head of the Professional Committee of the Israeli Krav Maga Association (IKMA) in the 1980s and 90s, and established and served as the Chairman and Chief Instructor of the IKMF from 1996 to 2010.

He established Krav Maga Global (KMG) in 2010, and now serves as its head and chief instructor.

Imi and Eyal: A Life of Krav Maga 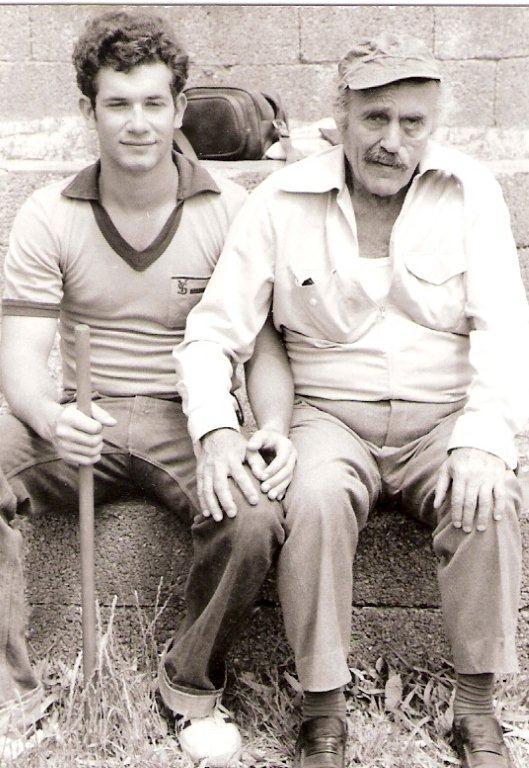 Born in 1959, Eyal Yanilov began his Krav Maga training at the age of 14 with Eli Avikzar, one of the top Krav Maga instructors at the time.

Soon after, Eyal began to study directly under the personal tutelage of the founder himself, Grand Master Imi Lichtenfeld (also knowns as Imi Sde-Or). Eyal demonstrated extraordinary talent as a student of Krav Maga, and as such, was assigned to start teaching Krav Maga at the tender age of 16. By 20, he was educating instructors at the training studio that Imi had entrusted to Eli Avikzar. On many occasions, he assisted and substituted for the Grandmaster in lessons and preparations with instructors and students who were to be tested for expert levels.

Eyal was Imi’s closest assistant and foremost disciple from the early 1980s, and served in this capacity for almost 20 years. Over his lifetime, Imi regarded Eyal as family and as the natural heir to lead the system. He initiated him during 24 years of training.

Imi awarded Eyal with both the Founder’s Diploma of Excellence and, for the first time, the rank of Expert Level 8/Master Level 3 – the highest level he ever awarded to a Krav Maga practitioner. Imi issued the former in 1991, in preparation for Eyal to be his highest heir, and in 1996, he awarded Eyal with the latter, after the IKMF was created, with Eyal as one of its founders.

Eyal and the Development of Modern Krav Maga 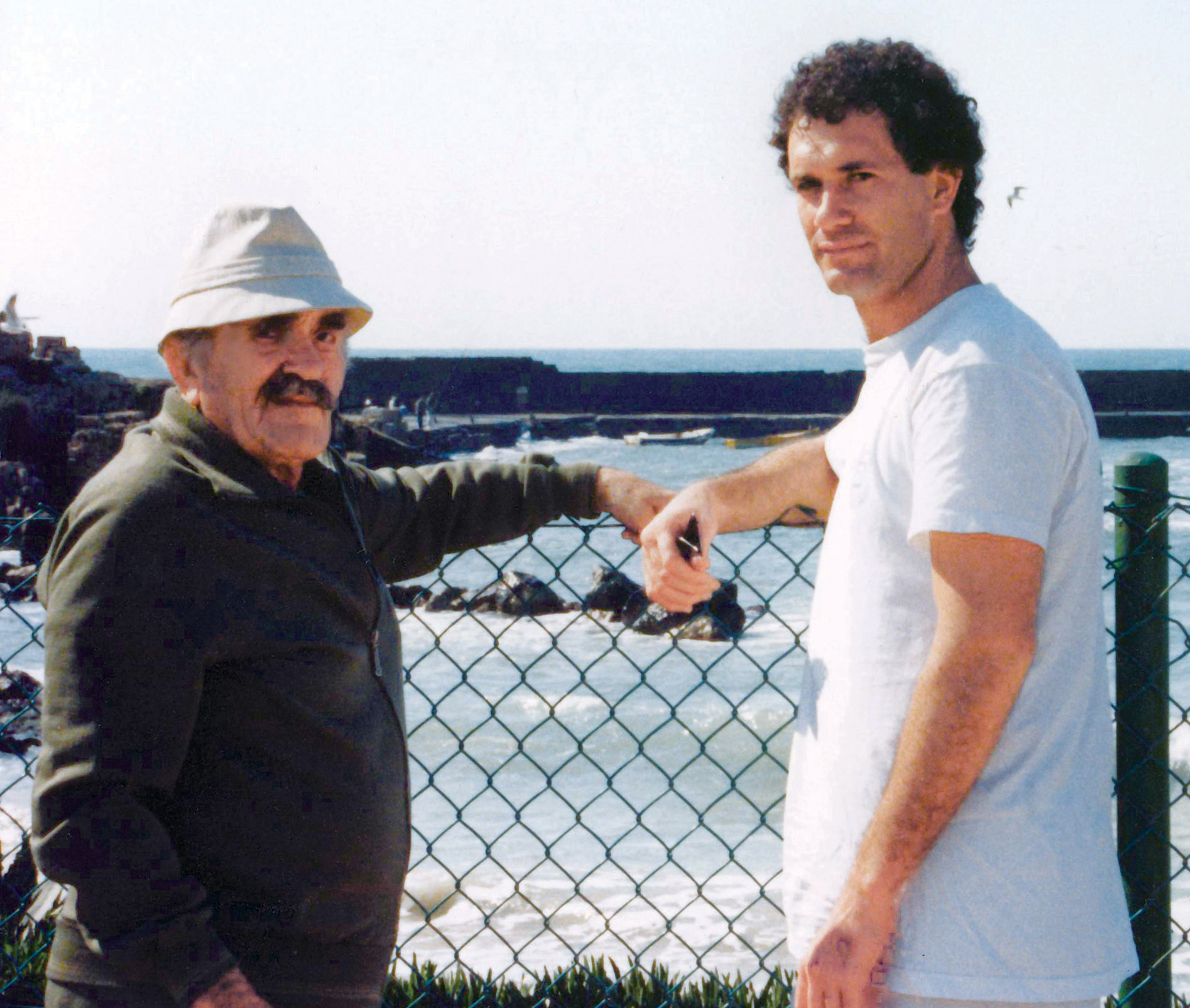 To address the modern conflict in the world, Imi entrusted Eyal with creating a new curriculum for Krav Maga in the 1980s. Eyal’s task was to transform it to a more organized and formal system that is built on principles of action and a unique instructional method. He became the head of the Israeli Krav Maga Association’s (IKMA) Professional Committee, where he was instrumental in the educating the general public in the benefits of Krav Maga, as well as training military and anti-terrorist units in Israel.

Part of Eyal’s contributions include systematizing the techniques which Imi intuitively developed, creating a logical, cohesive framework that ties together the many aspects of Krav Maga into a principle-based system. He was also responsible for developing third-party protection (VIP protection) techniques, one of the pillars of Krav Maga, in accordance to the system’s fundamental principles. He also helped change the old belt system and traditional attire (kimonos) that were previously used, moving instead to grades/levels in accordance with the new curriculum. All these developments were created with Imi’s approval and set the tone for Krav Maga as we know it today.

Eyal has devoted his life to spreading Krav Maga around the world. He first ventured out of Israel in the 1980s, when Daniel Abraham, the inventor of Slimfast, worked with Eyal to bring Krav Maga training to the US. A Krav Maga Self-Defense Instructors Course for US citizens soon followed, and thereafter, in the mid-1990s, training spread to Europe, as Eyal began teaching Krav Maga to both civilians and military and law enforcement units.

In a very real sense, Eyal created the demand for Krav Maga around the world. To manage this ever-growing demand, he founded the International Krav Maga Federation (IKMF) in 1996 and served as its President and Head Instructor under the guidance of Grandmaster Imi.

With this infrastructure in place, Eyal was able to spread Krav Maga throughout the globe. He personally trained the first generation of Krav Maga Instructors across the United States, Europe, Southeast Asia, and Australia. In total, he started Krav Maga programs in over 40 countries worldwide, including some under the auspices of the Israeli Ministry of Education. 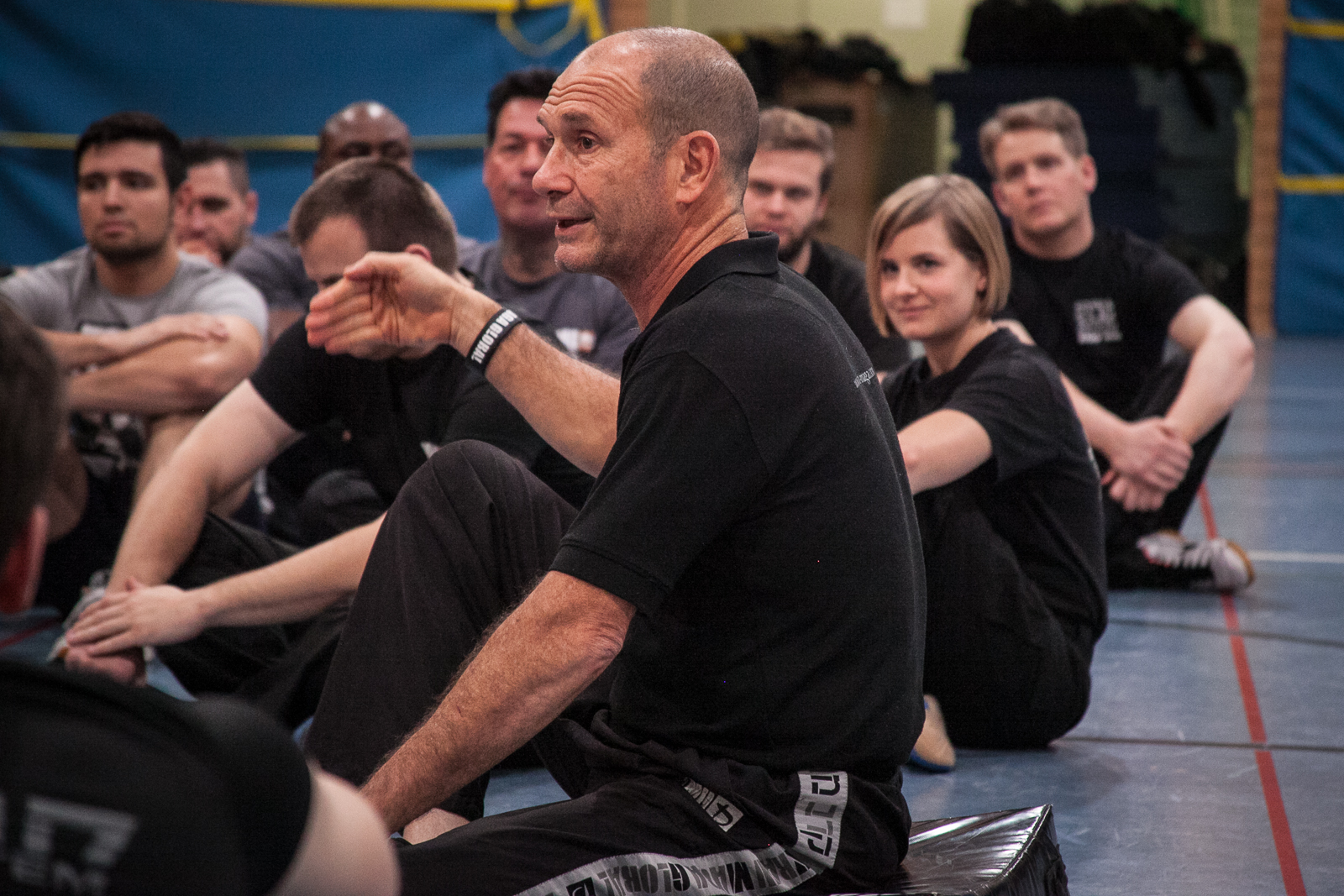 After Imi’s death in 1998, Eyal took it upon himself to push for the continued development of Krav Maga throughout the world.

As the system’s popularity grew, however, quality control over training became difficult, as different organizations and schools wanted to take advantage of the growing interest in Krav Maga. With these new organizations, both the quality of training and the connections to the source and founder of Krav Maga, Grandmaster Imi, varied. Some of the techniques and teaching methods had inconsistencies with the principles of Krav Maga, while others did not even bear a passing semblance to the system Eyal and Imi had developed.

In light of this, Eyal decided it was important to strengthen the quality of training and implement better controls. He wanted to push for knowledge transfer and monitoring under a professional global framework. Since the structure of the IKMF and its model of operation as a sport association no longer allowed him to pursue this, Eyal and his team of instructors and directors went on to set up Krav Maga Global (KMG) in 2010. 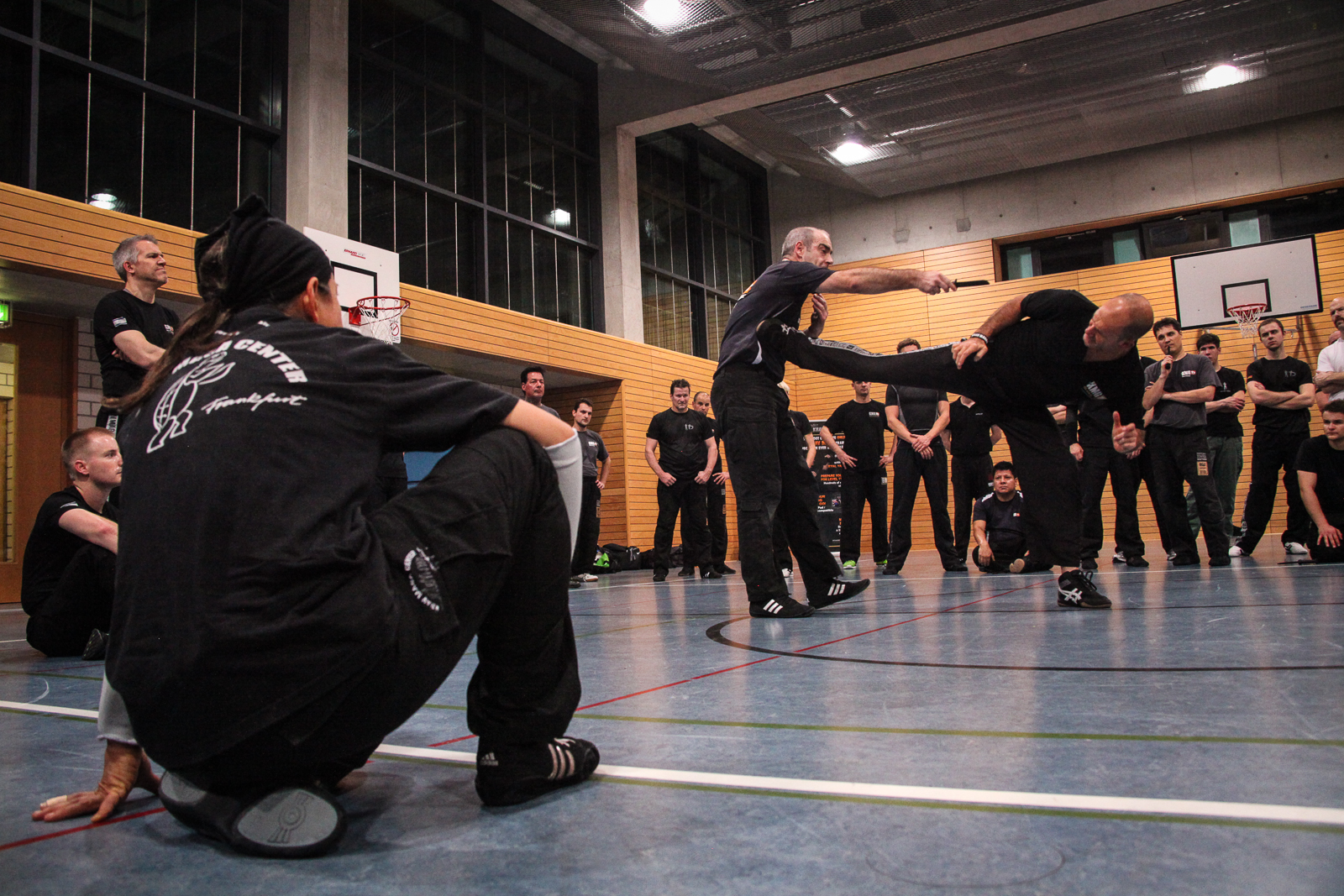 Under the personal supervision of Eyal, KMG operates a team of highly qualified instructors known as the Global and International Teams (GIT), who are responsible for delivering Krav Maga instructor education, exclusive workshops and specialist courses. The goal of KMG is to maintain a professional global infrastructure for disseminating Krav Maga, while maintaining the highest level of training.

Today, KMG’s instructors and schools, under the guidance of Eyal and his Global and International Team, are a key force in spreading professional Krav Maga teaching throughout the world. And as he has done for most of his life, Eyal is once again at the forefront of the development, definition, and dissemination of the system, updating it to address new problems in the world and bringing it to more places and people where it is needed.

As Imi’s successor, this is Eyal’s obligation and life mission, and one that he, as head of KMG, will continue to pursue for many more years to come.

Why Should you Train KMG/ Self Defence?

Why should you train KMG / Self Defense? The truth is, a much better question would be – why should someone not make an effort to learn self-defense? No one even thinks about getting into deep water without knowing how to swim and if a thought like this comes to mind, that mind eventually will stay without a body, and the sea will remove the genes of that person from the gene pool.

When we look at KMG(1) we know that it is not only about self-defense, so indeed there are additional benefits, factors and sectors such as “Fighting Tactics and Skills” and “3rd party and VIP protection”. A person should have a balance in life. Most people sit in front of their computer or handheld devices these days, and since we were not designed for this, we got so many health problems. Basically, we were born to move. KMG training is about movements and exercising the body, as well as exercising the mind.

In every conflict there are mental elements. In addition, mental capabilities and resources are needed to deal with the stress that the event puts on you. Not all conflicts become physical, but still, making correct decisions in adverse condition is an important goal for any KMG trainee.

With KMG training you will change your actions, habits, attention, awareness, body language and posture. Slowly your character will be strengthened. As your whole appearance will change, you no longer will look like an easy target, a victim. The result will be that aggressors will pick you less and less when they are searching for victims. If you were a person who used to attract predators, this will change over time.

Doing physical activities that are relatively safe, holistic, demanding, and dynamic is great for your body and mind. Your fitness level will improve. Strength, flexibility, stamina, and endurance will improve. In KMG training you are exposed to a variety of drills and exercises, functional games and increasing demands that are suitable for your level. The result is a healthier body and mind.

Improving your safety and security (stage 2) you get by training KMG. You also become able in protecting your loved ones, which is a good benefit. Having fun, helpful activities in a nice environment with people like yourself is a strong factor in belonging to a high-level community (stage 3). Reaching high levels and achieving a high grade is the next (4th) stage in the pyramid by Maslow.

Would you like to assist people, help them improve themselves, teach them what you got and acquired, transfer to them your knowledge and powers that you got from your teachers? If yes, then becoming an instructor of KMG is something to think about. This is the highest stage in the pyramid, fulfillment, which also contributes to your personal growth, because giving is also receiving.

So with all those benefits, is there any doubt? It is very clear why one should learn self-defense, and even better, not just self-defense but it should be KMG, and you should start now, not later.

Keep on spreading the word.

(1) As usual I write KMG also for Krav Maga, as these days there are so many who claim to teach Krav Maga but are fakes and were never certified or even had a month of real Krav Maga training. So I make this distinction. Would you buy a car without checking it, or a gun without trying it? Don’t start training Krav Maga without checking credentials and comparing it to the source. These days you have the tools of the Internet at your disposal, make the effort, it is about life and death, about saving and about changing your life.